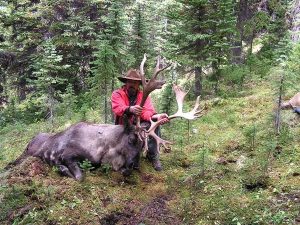 “CRAP” I muttered to myself, as I cleared back the sleeping bag, realizing it was daylight. I had slept in. “Bad habit” I said again as I staggered out of the tent and over to the cook tent. No one was moving so into the cook tent, spark the gas stove for coffee, spark the light and the wood heater, grab the bino’s and out to the meadow for a quick look to see if there was any Caribou milling about.

Doug was our 2nd hunter and was still sawing logs, and I was grinning to my self wondering how fast he could get his act together if I had spotted a legal Caribou.
Seeing none, I wondered back to the cook tent in time to stop the coffee pot from boiling over, and to see Darrell come out of his tent, He had already tagged out as he took a real nice 6 x 4 bull 2 days earlier right in front of camp.

Within about 15 minutes camp was a buzz with guides waking to the smell of coffee. Doug was always the last one out of the sack as his new found philosophy on caribou hunting was he did not have to be up before daylight to hunt caribou as we were seeing them all throughout the day. This was more than acceptable to his guide, the infamous Hod Smith. Hod has guided throughout the Itcha Mountains most of his 72 years for one Outfitter or another, and I was fortunate enough to have him this year.

Doug had passed up a smaller legal bull a couple days earlier right in front of camp, and because Darrell had taken his bull in front of camp, Doug was content to sit the whole day and watch the flat, read his book, drink coffee, and of course Nap. We took turns sitting with him to add a second set of eyes.

The book Doug was reading was “Grass beyond the Mountains” written by Richard Hobson. Rich and another young cowboy named Panhandle Philips were 2 Montana cowboys who were the first white men to ride into the Itcha Mountains and started the famous Home Ranch on the head waters of the Blackwater River in the mid 1930’s, and is the first of 3 books of their adventures into this small piece of “Heaven on Earth”.

“Doug what do you want to do today” I asked as he entered the tent for his first of many cups of camp coffee, “Walk, Ride. Or Sit”. Knowing his answer already as sitting in a lawn chair, drinking coffee was the only way to hunt Caribou.

The first day of his hunt old Hod had taken Doug for a short 10 mile hike, so his immediate response was “SIT”

“Okay” snickered, then Hod and I went back to our plan to cut a new trail into the swamp system just north of camp to hunt for some of the 50 inch moose we knew were around.
Doug grabbed his cup and he and Rod LaHaise, Hod’s assistant guide, and Darrell grabbed a couple of chairs and headed to the flat just about 50 yards from the cook tent.
“CARIBOU” Darrell calls Just minutes later as he ran into the cook tent “BIG BULL”
“Quick Hod, You got your boots on” as I looked down at my slippers. Out the door and into the meadow and there was a good bull walking along the timber line.

“Quick, get going you guys” I said as he was about 600 yards away, and off they went. I ran back to my tent and slipped on my boots grabbed my rifle and off I went after them. The bull had gone into the timber but I knew that if they got to the clearing ahead of him they would get a chance at him. As I closed the distance to them, I saw Doug go down on 1 knee; suddenly about 8 nice bulls ran out directly in front of them.
“Oh don’t shoot” I said to myself, as there were too many bulls to close together to tell which was a legal bull, and shooting into a heard of running caribou is risky business.

No shot and off they went into the timber. Gone, just like that. Doug got up, then he, Hod and Lynn Christenson (the other assistant guide) advanced slowly into the clearing. Suddenly I heard the distinct sound of Caribou horns brushing timber as a straggler was moving thru the timber towards the unsuspecting group. Another bull was about to pop out and I was worried that the BOO would pop out between the hunters, me and a camp full of horses.

Then the caribou ran out of the timber about 100 yards ahead of the group, I saw Doug go down readying himself for the words from his guide “Good Bull, Shoot”
The bull wasn’t slowing down and I could see immediately that he had too many points to count; I let out a whistle, then another, the bull stopped just short of the timber and turned to look at us.
“BOOM” and down he went.
“ALRIGHT” I cheered then worked my way up to the group of happy hunters.
AS I approached the group Doug turned and looked at me with a grin that went ear to ear, he then quoted a famous Panhandle Philips saying from the book he had been reading
“SEE STEWART, NOTHIN TO IT, NOTHIN TO IT AT ALL”

Want to join the discussion?
Feel free to contribute!

Wake Up and Smell the Coffee
Scroll to top