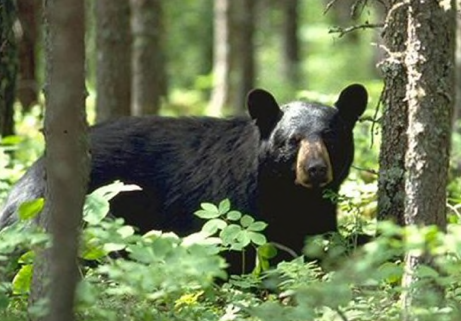 “THERE!! There he is”  A half a mile away and 100 feet below us was one of the biggest black bears You will ever see.The bruin had stopped in the middle of the road and was looking right at us. Ears up, nose to the wind, he knew something was amiss. As all bears will do when they suddenly realize they are in the wrong place at the wrong time he started to move his head from side to side, and slowly turning around to the direction he came from, he slowly started to move away like nothing was wrong, stopping to take a couple of bites of the rich clover that grew along the road and keeping us in his sight, he meandered out of sight over the crest in the road.

Moving immediately towards the spot we had seen him we crested the hill he was on and he was nowhere to be seen. We drove about a mile past this spot never stopping, finally I turned the truck around and went back and pulled over about a half a mile from where we had seen Him.“Don’t slam the door “I whispered to my hunter“. He might be moving this way, we will set up on that corner and wait. ”We moved and set up and waited for about an hour. “He made us” I said. “Where did He go?” asked the bewildered hunter from Texas. “He couldn’t have spotted us from that far away.”

We walked over to the spot where he turned and walked out of our site and there were his tracks in mud on the side of the road. Following the tracks where he crested the hill and plain as day you could see that as soon as he knew he was out of our site he booked over the bank and into the bush.I have been guiding for Trophy Black bears for 10 years and this is a common occurrence. I have great respect for what is North America’s most underrated Big Game Animal. A Trophy Black Bear is as smart and cunning as they come. The old saying “They don’t get that big from being stupid “ defines a Trophy Black Bear to a tee.

British Columbia is home to over 160,000 black bears and they range province wide. But there are only a few places to harvest a truly Trophy Black Bear. 6 ½ feet to 7 foot plus is a Trophy Black Bear, Skulls that range from 19 to 21 inches plus will also make Trophy class.Black Bears are now classified as 2 species, Mountain and Island or coastal Black Bears for SCI and Mountain Hunter Record Books. Boone and Crockett Minimum for Record book is 21 inches, Where SCI and Mountain Hunter Record books have a minimum score set at 18 inches.

There is a myth around the hunting community as where you will find the Biggest Black Bears, and this has been created by some very clever marketing by those that hunt Bears for a living, but this is exactly that clever marketing. You can find Trophy Black Bears from British Columbia to Manitoba and Alaska to the Carolina’s. So does the question where do I go on a guided hunt for a trophy class black bear? First are you had to decide what for you is a Trophy Class Black Bear?

What You need to find out is Where have the most trophy Black Bears been harvested . This can be done by looking in the B & C Record book as this has the highest minimum score for entry level. Look for consistency. As a Resident hunter and a Guide Outfitter in British Columbia the Central interior of the province is home to some of the largest Black Bears in the world, Not only are Trophy Class Bears harvested each and every year in this area but the hides on Mountain Black Bears are second to none. The next step on your quest to Hunt for a Trophy Black Bear is to find a Guide Outfitter that consistently harvests a high percentage of trophy class bears on a yearly basis.
I will help you with this next time.

Want to join the discussion?
Feel free to contribute!

Wake Up and Smell the Coffee